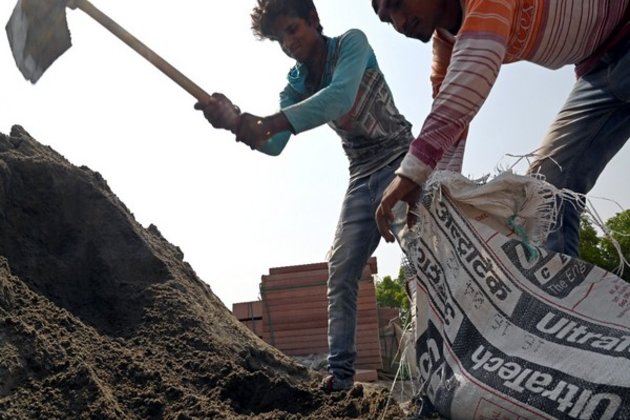 New Delhi [India], August 17 (ANI): The socio-economic condition of informal sector wage workers has always been a concern, as they are usually on the receiving end. However, in recent years, their conditions have improved considerably, thanks to the continuous and concrete steps taken by the Indian government.

According to the International Labour Organization (ILO), the informal economy comprises more than half of the global labour force and more than 90 per cent of micro and small enterprises (MSEs) worldwide. Informality is an important characteristic of labour markets in the world with millions of economic units operating and hundreds of millions of workers pursuing their livelihoods in conditions of informality.

The Indian government is mandated to provide social security to the workers of the unorganised sector including daily wage workers by formulating suitable welfare schemes under the Unorganised Workers' Social Security Act, 2008. The government has framed policies related to life and disability, health and maternity benefits, old age protection and other concerns of the daily wage workers.

The PMJJBY is a completely cashless and paperless scheme. The beneficiary families under AB-PMJAY have been identified from the Social Economic Caste Census (SECC) of 2011 basis six deprivation and 11 occupational criteria across rural and urban areas.

Old age protection is provided through the Pradhan Mantri Shram Yogi Maan-Dhan (PM-SYM) pension scheme in the form of a monthly pension of Rs 3,000 after attaining the age of 60 years.

The Right of Children to Free and Compulsory Education (RTE) Act, 2009, mandates the appropriate government to provide free and compulsory elementary education to every child of the age 6 to 14 years in a neighbourhood school.

To improve the conditions of the daily wage workers in India, a revision of minimum wages has been made. Section 3(1) (b) of the Minimum Wages Act, 1948 mandates the Central Government and the State Governments to review the minimum rates of wages so fixed in the scheduled employments in their respective jurisdiction at intervals not exceeding five years and revise the minimum rates, if necessary.

The minimum rates of wages in the scheduled employments in the central sphere were revised in 2017. Further, in order to take care of the rising prices, the Central Government revises the Variable Dearness Allowance (V.D.A) on basic rates of minimum wages every six months effective from April 1 and October 1 every year on the basis of the Consumer Price Index for industrial workers.

The Indian government is not only committed to periodic review and revision of the minimum rates of wages but also to extend its coverage across employments and provide for floor wage. Accordingly, the provisions of the Minimum Wages Act, 1948, have been rationalized and amalgamated in the code on Wages Act, 2019, as passed by the Parliament and notified on 08.08.2019. The Code on Wages, 2019, provides for universal minimum wage and floor wage across employments in organized and unorganised sector and the existing provision underthe Minimum Wages Act, 1948 to restrict the applicability of minimum wages to Scheduled employments, has been dispensed with under the Code.

The code mandates the Indian Government to fix floor wage applicable across the central and the state sphere. The code stipulates that the minimum rates of wages fixed by the appropriate government shall not be less than the floor wage. The said provisions of the Code on Wages, 2019, have not come into force.

The ILO report on Indian workers comments on various issues including on Indian workers having low average wages, longer hours as well as that the workers in Asia and the Pacific enjoyed the highest real wage growth among all regions over the period 2006-19, with India leading the way along with other countries.

The Code on Wages, 2019 which has been notified on 8th August 2019 universalises and creates a statutory right of minimum wages for all workers whether in organised or unorganised sector. A new concept of statutory floor wage has also been introduced in the Code on Wages. The code also provides that the minimum wages are to be ordinarily reviewed and revised by the appropriate governments in intervals not exceeding five years. (ANI)