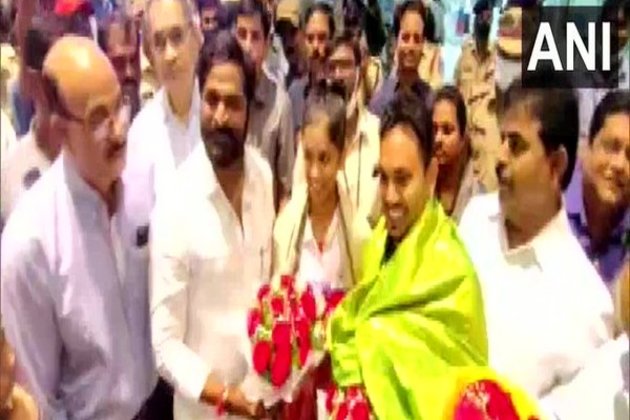 Telangana Sports Minister V Srinivas Goud gave a warm welcome to Sreeja Akula who arrived at Rajiv Gandhi International Airport in Hyderabad's Shamshabad for the first time after winning a gold medal in the Commonwealth Games.

Akula said that she is grateful to the Telangana government and to her coach for teaching her everything.

"As I have won an international medal for our country, I am very happy with my achievement. I am very thankful to CM KCR, KTR and Sports minister for helping our association, that is how it helped me reach where I am today. I am grateful to the Telangana government and to my coach for teaching me everything," said Sreeja Akula on winning the gold medal.

Speaking to media persons, the Sports Minister said that sports are developing in the state with the blessings of the Chief Ministerlplmlkbtyy.

"Even Nikhat Zarin who won gold reached this stage with the government's help. Even Sreeja was given the best coach who could bring out the best in her and we believe that she will bring gold in the Olympics also," he said.

The ace paddlers Kamal and Akula were at their best during the match as they crushed their opponent 11-4 in the first games and did not really allow Malaysian players to be in a position of advantage.

The second game of the match saw Malaysian paddlers, giving a tough fight and making a stunning comeback against the Indians to claim the second game by 11-9.

Kamal and Akula bounced back swiftly to play some aggressive shots as the Indians claimed the game by the margin of 11-5. In the fourth game, the Indian duo claimed the 11-6.

In the decider both the teams tried their hardest to clinch the lead. The decider was hard fought as both teams were not ready to give up any points but the Indian paddlers played with swift moves as they clinch the match as well as the gold medal by 3-1.

Earlier, the Indian men's doubles duo of Achanta Sharath Kamal and Sathiyan Gnanasekaran bagged the silver medal in the men's doubles final at the ongoing Commonwealth Games 2022 in Birmingham.