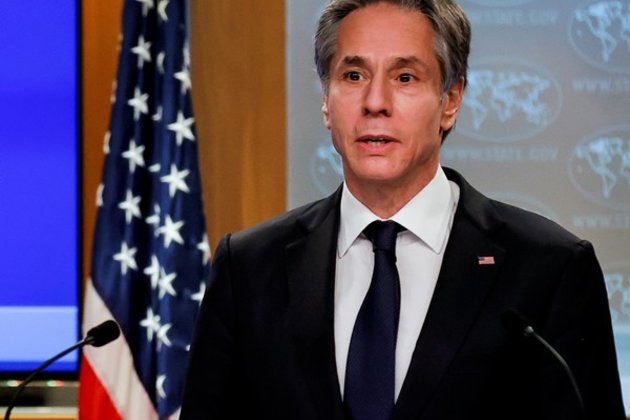 Washington [US], August 8 (ANI): US Secretary of State Antony Blinken on Monday welcomed the ceasefire in Gaza and reiterated his country's commitment to Israel's security.

"The US welcomes the ceasefire to restore calm in Gaza and Israel. We are grateful to those who mediated this agreement and express our condolences to the families of civilians who lost their lives. We will continue to promote calm and remain committed to Israel's security," Blinken tweeted.

On Sunday, the Palestine Islamic Jihad (PIJ) active in the Gaza Strip announced that it had reached a cease-fire agreement with Israel. Israel also confirmed the Egyptian-brokered deal that ends the Israeli airstrikes and the barrage of Palestinian rockets.

US President Joe Biden welcomed the announcement of a ceasefire between Israel and Gaza-based militants after three days of hostilities, the worst incident between the two since the 11 days of war last year.

Biden said the US has worked with officials from Israel, the Palestinian Authority, Egypt, Qatar, Jordan, and others throughout the region to encourage a swift resolution to the conflict.

"I thank Egyptian President Abdel Fattah Al Sisi and the senior Egyptian officials who played a central role in this diplomacy as well as Amir Sheikh Tamim Bin Hamad Al Thani of Qatar and his team for helping to bring these hostilities to an end," Biden said in a White House statement.

These remarks by Biden come as airstrikes were carried out across the Gaza Strip under Israel's operation Breaking Dawn against the Palestinian Islamic Jihad.

The US President said that his support for Israel's security is long-standing and unwavering--including its right to defend itself against attacks.

"Over these recent days, Israel has defended its people from indiscriminate rocket attacks launched by the terrorist group Palestinian Islamic Jihad, and the United States is proud of our support for Israel's Iron-Dome, which intercepted hundreds of rockets and saved countless lives. I commend Prime Minister Yair Lapid and his government's steady leadership throughout the crisis."UN Secretary-General Antonio Guterres also welcomed the announcement of a cease-fire in Gaza and Israel.

Guterres is deeply saddened by the loss of life and injuries, including children, from airstrikes on Gaza and the indiscriminate firing of rockets toward Israel from population centers in Gaza by the PIJ and other militant groups, said Stephane Dujarric, the spokesperson, in a statement.

The hostilities have contributed to a humanitarian emergency. Crossings into Gaza have been closed and power shortages are affecting essential facilities and supplies. Hundreds of buildings and homes have been destroyed or damaged, leaving thousands of Palestinians homeless, said the spokesperson. (ANI)